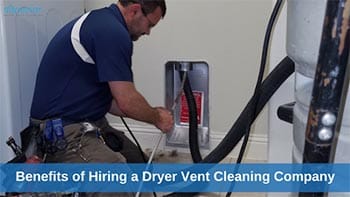 There might not be a more overlooked part of your house than the dryer vent, and it’s easy to see why. No moving parts. No exciting bells or whistles. It just sits there quietly year after year collecting dust, allergens, pollutants, and sometimes lint which bursts into flames. Every year brings more reports of dryer vent fires that could easily have been prevented with a call to a dryer vent cleaning company. The following are six tangible benefits in having your dryer vent cleaned and sooner rather than later would be a good idea.

Bet you never thought of this. A clogged dryer vent reduces the lifespan of your clothing! The process goes like this. As lint and other materials build up inside a vent, it reduces the amount of heat from the dryer that is properly routed outside the house. This means more heat is retained in the appliance. It also means that more than the needed amount of heat stays in the appliance, creating damage to the clothing fibers and hastening the day of their demise. It’s simply too much heat in too confined a space.

Another excellent reason to call a dryer vent cleaning service is that operating your dryer with a clogged vent might be costing you as much as thirty dollars monthly. Are you the kind of person who likes to take out a twenty and ten dollar dollar bill the first of each month and burn them to ashes? We sincerely hope not, but those are the facts. A clogged vent causes the dryer to run less efficiently, resulting in more energy used, and – you guessed it – the extra cost shows up on your utilities bill. If it’s been a while since the vent has been cleaned, the cost has likely crept up so slowly you haven’t even noticed.

We mentioned the idea earlier that allergens tend to collect in dryer vents. This doesn’t sound like an especially big deal except that it can literally make members of your household sick, as well as cause structural damage to the house. How does this happen? Let’s assume your dryer runs inefficiently (due to a partially clogged vent) and clothes seem to always be a little damp after the drying cycle. This creates allergens which end up in the vent, are multiplied by moisture, and likely to get blown around the house and eventually turn into the mold that makes you sick and rots the structure.

Perhaps one of the most critical services dryer vent cleaning companies perform is to reduce the threat of carbon monoxide poisoning. What does carbon monoxide have to do with a dirty vent? Quite a lot, actually. This odorless, colorless substance is literally undetectable with human sense but becomes a real danger when your dryer vent doesn’t exhaust properly. If you have a gas dryer, pay attention! A clogged vent can send this by-product of gas burning back into your house where it can create flu-like symptoms in the household. If family members seem to stay chronically ill, this could be a possibility.

When clothes aren’t completely dry after a single cycle, the dryer normally gets the blame. While it could be it’s time to replace the thing, there’s also a chance that a clogged vent is causing the “backflow” we referred to earlier, making it run inefficiently. The byproduct of damp clothes has already been mentioned, but you should also be aware that a poorly-running dryer will wear out faster. Poor performance creates a shorter lifespan and, before you know it, you’re back at the local appliance store preparing to spend hundreds of dollars.

This truth is simple. A clogged dryer vent is a fire hazard. Let’s assume you have dryer lint collecting in the vent. As the dryer discharges heated air into the vent, it flows over the lint and there is the real possibility it could ignite into flames. It happens more frequently than we’d like to think. With so many laundry rooms stuck off in distant areas of the house, that fire might turn into an inferno before you notice it. We don’t need to mention the potential fact of loss of your home or even your life.

If you can’t remember the last time your dryer vent was cleaned, for your family’s health and safety, please contact Superior Dryer Vent Cleaning, a dryer vent cleaning company with a stellar reputation for vent cleaning, replacement, repair, or rerouting anywhere in North Texas. We’re always glad to receive your call, or feel free to go online and schedule a professional inspection. One thing to keep in mind. The proper and effective cleaning of a dryer vent is a job for professionals. This is a high stakes activity that needs to be done right.

Locally owned and insured, we offer our dryer duct cleaning service to the entire DFW Metroplex and the surrounding areas.

Locally owned and insured, we offer our dryer duct cleaning service to the entire DFW Metroplex and the surrounding areas.

Made with ❤ by The Linear Web